Pascal Boyer's views of science, social science, and the humanities

This is an addition or appendix to my prior post. Looking at that post again, it is pretty weak in its discussion of the humanities. As I was preparing that post I had a nagging feeling that I was forgetting a crucial paper on the topic. Well, I was. That paper is:

Boyer defines three "modes of scholarship" popular in cultural anthropology:
The first two are interesting and they are my topic here. His third mode is a term for postmodern and postmodern-inspired scholarship. I am not thrilled with this mode or Boyer's discussion. In my scholarly ontology, science and erudition are empirical fields, where real data are analyzed with respect to ideas and concepts. Propositions are tested and evaluated, and they are supported or rejected. In postmodern-related fields, ideas are rarely tested or directly evaluated in terms of data. Propositions cannot be shown to be right or wrong; they are right by definition (for more on this theme, see Smith 2015 or Abend 2008 or Haber 1999). That distinction, which to me seems more fundamental than the issue of salient connections, does not come through in Boyer's scheme. But this is not my focus here.

Science:  See my prior post on this. It is an okay discussion, not great, but it does get some of the ideas across.  For Boyer, "the scientific mode, if difficult to explain, is very easy to recognize. You know if when you see it." (p.117). It involves skepticism, testing, and the building of cumulative knowledge as new finds reinforce (or change or refute) old findings.

Erudition involves "the requirement that specialists of the discipline should have detailed knowldge of a particular domain of facts" (p.118). Someone who has devoted their life to the study of Byzantine coins creates a different kind of knowledge than someone who comes in a tests a specific hypothesis based on the frequency or types of coins. Someone who has studied a particular artifact category all their career will contribute different empirical knowledge from someone who uses those artifacts in a specific scientific study. 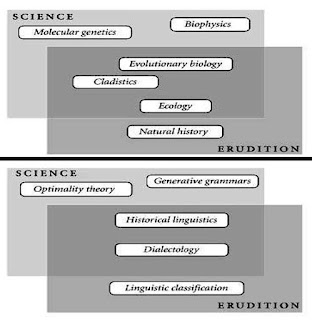 (1) Many scholarly disciplines employ elements of both modes.  This diagram (from his page.120) shows biology and linguistics, each of which has specializations with less or more scientfic mode and erudition mode. Archaeology clearly employs both  modes (as well as non-empirical and speculative modes)

Think of all the "erudition-mode" scholars you know, and how valuable they are, both their publications and their personal consultations. And think also of those people who do rigorous research using a scientific epistemology, but aren't the big experts in any specific domain of artifacts or sites or method.

(2) The science/erudition distinction is orthogonal to the differences between natural sciences, social sciences, and the humanities. This is quite interesting, and really helps us understand scholarship in archaeology and other fields much better. See the second diagram, from page 121 of Boyer: 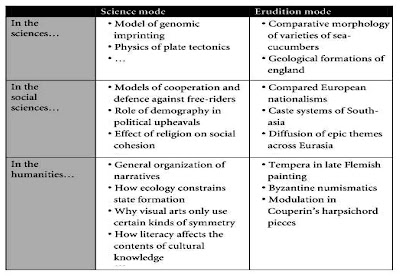 The Humanities
But what exactly do we mean by the humanities? I don't have a lot to say here. I do know a lot about  the erudition mode of humanities research. For me, this helps clarify why I find some work by art historians in my area, Mesoamerica, as rigorous and insightful, and almost "scientific," whereas  other art historians produce work that seems flaky, speculative, and not useful. The former are operating in erudition mode, and the latter are not (they tend to use abstract philosophical scholarship, a mode that is fine for the arts or humanities, but deadly for the social sciences). Art historians whom I have worked with and published with--people like Emily Umberger and Elizabeth Boones--are clearly erudition scholars. Some of their methods and insights have worn off on my over the years, for the betterment of my own scholarship. Other art historians, whom I won't name, operate less frequently, or less intensively, in the erudition mode.

If you want to follow up on the question of "what are the humanities" (which I have not dared to answer here), you could check out the website "4Humanities: Advocating for the Humanities," with some useful materials.

Does the problem of "meaning" void the application of scientific methods to social science?
Here I am going to present a scheme from 6 and Bellamy (2012:28-31) on the differences between the natural and social sciences. They list four common justifications for the statement that "there is something fundamentally different in social and natural sciences:
I don't know whether this gets to the comment Simon made on my prior post about "subjectivities." I have to admit that I don't understand much about subjectivities. I put such themes (personhood, agency, consciousness) into the category of abstract, philosophical social theory. To risk repeating myself, such theory is fine, but it doesn't get us very far to developing causal explanations, to explaining the past, or to relating our results to bodies of social science knowledge about contemporary societies (this is getting to the topic of my upcoming second and third posts on science in archaeology).  To quote myself:

Pascal Boyer is an interesting guy. Check out his home page, and read the article I describe above.

'I don't know whether this gets to the comment Simon made on my prior post about "subjectivities."'

I'm not sure either. Let me stress that I'm replying here as a curious outsider, with no archaeological expertise and no axe to grind (at least not within your discipline). If I'm arguing here its only to understand what your position is.

Where I still have a problem is this. You give Bellamy's point that ideas, intentions, meanings and the like are to be treated are to be according to the same methodology as pots, and walls, and other material remains. This is an interesting statement, which opens the door to discussion that would indeed involve dealing with 'subjectivities'. But you immediately close that door by suggesting that such notions are 'philosophical' and of no use for a scientific archaeology. Perhaps this closing the door is warranted, but again I am left wondering whether the human past can be explained without invoking ideas of agency, identity, and meaning.

Perhaps it would be helpful to move the discussion to a less abstract level. I've just put up a post on our Rounded Globe blog in which Mark McKerracher discusses a paper by J. Brück (2000) on farming and settlement in middle Bronze Age Britain. As I understand it, Brück argues against the conventional idea that the rise of agriculture gave rise to early farmsteads, suggesting rather that what came first was a shift from extended kinship groups to autonomous family units, settled on farmsteads, and that this social change caused the rise in agriculture. (For the blog post see here: http://roundedglobe.github.io/agricultural-strategy.)

In relation to your own post, I have two questions:

(1) Do you regard Brück's hypothesis as scientific?

(2) If so (and assuming also it is plausible) do you believe it possible to explain the social transformation itself?

I would assume that you would answer in the affirmative to the first question (surely this is a theory that can be refuted by evidence). It is your answer to the second question that really interests me. For it is not at all obvious to me that one could provide anything like a satisfactory answer without invoking concepts of intention, meaning, and identity.

@Simon - Quick comment - your comment was flagged as spam, perhaps because it starts with a quotation mark (which seem to give Blogger problems). Anyway, I retrieved it.

Interesting question. I'll take a look and get back on this. Going nuts right now at school, so it may take a bit to read these things. But this is interesting. In archaeology, too often people either ignore contentious questions or else shout about them. More soon......