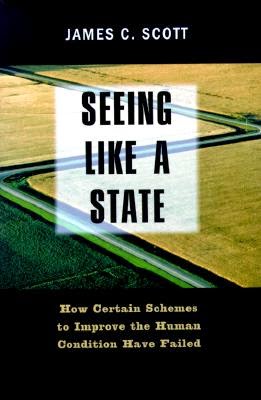 Many archaeologists working on complex societies like to cite the works of James C. Scott, the political scientist/anthropologist/historian at Yale University. His works on peasant resistance (Scott 1976, 1985, 1990) are influential in the archaeological resistance literature, and his book on how some state regimes try to control people and society but end up creating more problems than they solve (Scott 1998) is widely cited. I'm not fond of Scott's works - they are simplistic and they often miss the main point of the topics he writes about. I don't want to get sidetracked here. But if you are one of those who likes his book Seeing Like a State, you may want to check out the scathing reviews by sociologists Russell Hardin (2001), and Michael Mann (American Journal of Sociology, 1999, vol. 104-6, p. 1813). Hardin was so exercised about deficiencies in Scott's theoretical approach to knowledge that he expanded the critique in his book review essay into a later book chapter (Hardin 2009). Or (to get some idea of Mann's views of Scott) think about Scott's scheme in relation to Blanton and Fargher (2008); that will show you how simple-minded and biased his account is (IF you have read Blanton & Fargher, that is).

Anyway, Scott recently wrote an interesting and incisive review of Jared Diamond's latest book, The World Before Yesterday in the London Review of Books. There is a nice post about Diamond's book and Scott's review in Savage Minds. While most of Scott's review is fine, I can't let his final sentence go unchallenged:

"We have virtually no credible about the world until yesterday [that is, about life and society before the modern era] and, until we do, the only defensible intellectual position is to shut up."

Scott's position in his book review essay is that Jared Diamond can only speculate about human life and society in the distant past, and that his speculations are heavily biased, misleading, and wrong. Scott is correct in his more limited point that contemporary hunter-gatherer society is a poor model for Paleolithic human society. But, "no credible evidence" ?? I guess we archaeologists are just scurrying around playing in the dirt for nothing. We can't say anything "credible" about life in the distant past. In other words, archaeology is worthless for purposes of social history or long-term changes in human society.

Scott's essay is mostly quite good. He does make one stupid statement: that all past states were slave societies, with up to 85% of the population in slavery (give me a break). But apart from that, I was just starting to think this was an insightful essay, and my low opinion of Scott was starting to improve slightly, when I got to the final line, quoted above. Perhaps James C. Scott's "only defensible intellectual position is to shut up" about topics he knows nothing about. And this, of course, is precisely the basis of his critique of Jared Diamond.........


PS - Why don't I like Scott's work on resistance and hidden transcripts? I am a materialist. If the peasants are being screwed by the landlords, then that is the dominant social-economic fact. It makes no difference whether they accept the public transcript or not. It makes no difference if they elaborate "everyday forms of resistance." It makes no difference whether the peasants follow the proverb that begins Scott's 1990 book on resistance: "When the great lord passes the wise peasant bows deeply and silently farts" (Scott 1990:v). Farts don't bring about change. What makes a difference is when the peasants express their resistance by attacking the bulldozer operators with machetes, or when they take up arms and horses (and big hats) to follow Pancho Villa and Emiliano Zapata in attacking the federal armies. Resistance is only important when it has clear social and political
consequences. For a more scholalry expression of these views, see Brown (1996).

Hardin, Russell  (2009)  How do you Know? The Economics of Ordinary Knowledge. Princeton University Press, Princeton, NJ.