Did a robot edit our paper?

I've just finished correcting proofs for an article ("Neighborhood formation in semi-urban settlements") in the Journal of Urbanism (Routledge journals). Most of my "corrections" were fixes of errors introduced in the editing process. This is always frustrating, but the manuscript was fill of these errors. It looks to me like many of the errors were produced by algorithms, not human beings. Perhaps the publisher is trying to save money by using automated bad editing instead of human editing.

Here are a few examples. This paper described a joint research project, and it has eight authors. Every place where we used the term "our" was replaced, typically by "the" and occasionally by something else. Thus "Our research indicates...." became "The research indicates...." Increasing the occurrence of passive voice is a great editing trick, if the goal is to confuse the reader about the meaning of sentences. But this isn't a post-modern journal. I replied that they could either return to the "our", or they could go with something like "The research described in this paper indicates..." Adding unnecessary words is rarely a good idea, unless there is some taboo on clear and concise prose.

Of course the copy-editing changes are not highlighted for the author, so I had to do a search for "our" in the submitted manuscript, and then cross-check with the proofs to make sure I had found all of the changes that needed attention. Many book publishers will still show authors the copy-editing, but commercial journal publishers these days just show the proofs, making it difficult to find glitches introduced by the copy-editor.

A second example is the state names for cities. I guess Chicago is not a sufficiently precise description of the place where the University of Chicago Press is located, so the robot added "IL" to avoid confusion with any other "Chicago" that may be lurking out there (are there others?). The same with Seattle. But here is how the copy-editing came out in every case:  "ChicagoIL" instead of "Chicago, IL". It is hard to imagine a human leaving out the comma and space, so this must be another case of editing my algorithm.

And the most time-consuming systematic errors to fix were those resulting from capitalization practices for foreign-language titles in the bibliography. Even if the journal bibliography style has capitalization of all main words in the title of articles and books, works published in Spanish and French are capitalized differently, following conventions in those languages.

"Capitalization of foreign titles. For foreign titles of works, whether these appear in text, notes, or bibliographies, Chicago recommends a simple rule: capitalize only the words that would be capitalized in normal prose--first word of title and subtitle and all proper nouns. In other words, use sentence style."  (page 401, section 10.3).


Then the Taylor and Francis editor replied to my changes to foreign titles, saying that they violated the journal style on capitalization and he would fix them. He sent a link to the publisher's style guide. I check that out, and it turns out that it specifies the capitalization procedures I followed. So he evidently had not looked very hard at his own style guide! I hope my reply to him was in time to prevent him changing my corrections into incorrect capitalization.

By the way, are you familiar with the Chicago Manual of Style? If you haven't looked at this reference work, you probably should.

Our paper, which has been in press forever, is: 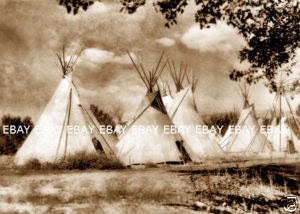 Answer to the question on the illustration at the top: Tipi aggregation camps can be classified as "semi-urban" settlements, but by most definitions they are not cities or urban settlements. What is a semi-urban settlement? Read our article and find out.

I got back proofs of a paper recently where the spelling of archaeology was changed to archeology in every instance. I'd be fine with that if it was the convention of the journal but the journal actually had the "ae" spelling in the title. Finding and fixing that and other similar changes sure does feel like wasted effort.

So I guess another question, beyond "did a robot edit the paper," is whether the humans or robots who do the editing ever read the journal style guide.