The Research Works Act, H.R. 3699, is a bill that would make it illegal for researchers to post their own publications on the internet for public access. Guess who is behind this bill? Elsevier and the commercial publishing lobby (the Association of American Publishers). 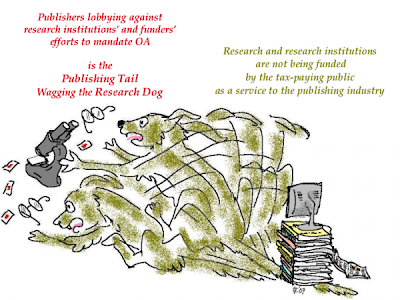 Steven Harnad's post: The Private Publishing Tail Trying To Wag The Public Research Dog, Yet Again contains the most detailed and useful discussion of the issue that I've seen.

Michelle Clement's blog at Scientific American, Reseaerch Works Act would deny taxpayers access to federally funded research., starts out, "Carolyn Maloney, a congresswoman funded by Elsevier, which is a major for-profit publishing company, is trying to pass the Research Works Act, which would deny Americans free access to research funded by taxpayer money."

For more information about the bill and about WHAT U.S. CITIZENS CAN DO about this, see the Alliance for Taxpayer Access.