I've had nine academic job interviews in my career. Here is my won-lost score:
First, some generic advice. A commenter on my prior post ("How to give a bad conference talk") asked my advice on job talks. You just need to give an excellent presentation, longer than at a professional meeting, and one that explains a bit more of what you are all about intellectually and professionally. Much more important, in my mind, is how a candidate interacts personally with people in the department. You should read up on the faculty and programs, and be prepared to talk about them intelligently. Read this very complete and excellent list of job interview questions. I always took the attitude that an interview was a chance to learn about a program, to make new contacts, and to talk shop with a bunch of typically interesting colleagues who will either be very interested in you, or at least will probably pretend politely they are interested. If you don't get an offer, you at least have benefited from the experience.

As for my experiences, the juiciest episodes are better explored over a beer sometime. I will sanitize things and only tell a few tales here, using anonymity to protect the guilty. I am still peeved about the bad faith interviews (not that I would like to work at either institution!). In one case, a small but high-quality program, no one seemed at all interested in my work. They had someone there on a temporary line, and clearly wanted to hire this person full time. It is not uncommon to have one applicant already in a department, and rumor ALWAYS says that this person must have the inside track.  But in several searches I know well, this was not the case. The searches were rigorous and unbiased, really looking for the best person, whether or not there was someone already in the department with a temporary position.

My other bad-faith interview was in a large prestigious department in a major university. A bunch of the people I talked to spent most of their time saying how great Dr. X is. (Do you know his work? Isn't it good? Have you heard what he said about this or that? Oh, and where do you work?) Before I finished, I asked someone outright if they planned to make an offer to Dr. X, and got a positive reply. I felt good when Dr. X. turned them down.

Several years later this same department asked me again to interview! I made darn sure they indeed had a real interest in me before I went. Yes, I was a serious candidate. I thought the interview went well; I talked to lots of people (more than on my first trip), who seemed very interested in what I had to say. I was told they wanted to make an offer, and had to do a tenure review (I was tenured elsewhere at the time) in order to make an offer with tenure. I sent them all my publications, etc. And that was the end of it. I never heard back from the department, to this day (some 20 years later!). Maybe my email  tomorrow will contain a belated job offer (or a rejection!). After quite a while with no news, I ran into someone from the department at a meeting, who said they were sorry the job didn't work out. When I evidently looked puzzled, they said, "Didn't the chair contact you?" Nope. Still waiting for that one...... (Note that I am counting this one as a "good-faith" interview, perhaps too generously).

It turns out I did not pass their tenure review, because I had not yet published a book. It was a "book department": no book, no tenure. Now, every time a book comes out, I am tempted to send a copy to that department. I have published more books now than any archaeologist in that department. But I guess I just wasn't good enough for them. Actually, this episode may have been a blessing in disguise. I had an offer from Albany at the same time, but I might have been tempted by the prestige of the other university. Albany was a much better fit for me (and a much more congenial department overall), and I flourished in ways I would not have at the other place.

One more interview story. It's too long to go into detail here, but I will mention one notable aspect. This was one of my unsuccessful, good-faith interviews. A question from a graduate student after my talk effectively destroyed the entire conceptual foundation of my talk. Absolutely buried me! Deader than a doornail. The interviewee's worst nightmare. As soon as the question was posed, I realized I was sunk. Yet I had this flash that the answer to the contradiction was just at my fingertips, but I couldn't bring it in. I did not get an offer (surprise, surprise). Later I figured out how to resolve the conceptual contradiction that burned me, and got some mileage out of it in a couple of articles. In the acknowledgements of one, I thanked an anonymous graduate student for asking the right question at the wrong time. But after that experience, I was bullet-proof at interviews. There was nothing anyone could do to me as harmful as that experience, and I was much more relaxed at interviews.

I have no idea how typical my experiences have been. Did I have an especially high number of bad-faith interviews? I don't know. I did enjoy most of the interviews, and I met people and learned things at all of them. And now, I hope, I am through with job interviews! 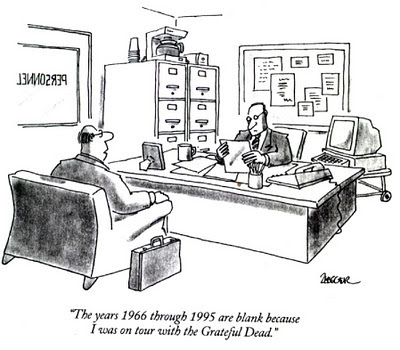 I was thinking that three out of nine was not too bad a record for interviews, but then I talked to my daughter Heather, who is in the business world. Every single job interview she has participated in has led to an offer! Oh well.

So Dad, I am left wondering about the question that stumped you! I have only had five interviews/offers of which merely two were worth entertaining... :) I like your blog!

Heather- As I said, some of these things are best told over a glass of beer!

I have no words for this great post such a awe-some information i got gathered. Thanks to Author.

Excellent pieces. Keep posting such kind of information on your blog. I really impressed by your blog.

Funny thing that happened to me: I went to an interview, and got the job - or so I thought. Then I got an email saying thank you for your interest but we regret to to inform you... I later learned it was a glitch in the system, but imagine my confusion :o)

What really crosses me is the lack of feedback after a job application, and even worse, after an interview, which has become very common in the UK.

The common excuse is that they currently get more than 100 applications per academic post, so they don't have the resources (read: they cannot be bothered) to send a reply to the candidates (!!!! Most cannot even bother to send a b&%^$y bulk email of rejection).

Culprits of such behaviour have been in my case:

Considering that, nowadays, most UK institutions do not accept CVs, but require special application forms that take hours to complete, I find the lack of feedback outright rude.

Even worse (?) once, after an interview that led to a vague rejection email, I kindly asked for more detailed feedback, to help me improve my skills. I was referred to the Head of the interview panel who basically refused to send me feedback in writing, not even by email, told me to call him, and then kept dodging my phone calls. PA-THE-TIC. That was in Bournemouth University, UK, btw. Was this a "bad-faith" interview? I think so now.

I had heard that UK academic job interviews were much worse than those in the US, and your experiences would seem to support that view. I think a lot of this gets down to basic good manners and human decency (or the lack thereof).

OK, not exactly an academic job anecdote, but still very interesting I think: a few months ago I applied for a lab job with the London Metropolitan Police (aka Scotland Yard), and the following happened:

- I happen to know a couple of police officers, who noticed on their intranet (restricted access) that the "external" application procedure was different and more vague than the "internal" one which had very specific requirements and a specific application form!

- After a few months without even an email, I read on the news that the Met decided to hire thousands of forensic specialists from the recently dismantled FSS (Forensic Science Service)...

So, the whole "external" job opening procedure was a complete useless cover up for the fact that they had already targeted internal candidates.

Not being able to let that go, I sent the HR an email confronting them with the facts. I got a "robotic" answer days later telling me that I was rejected and that I was reminded that the Commissioner "has the right to reject any application without reason" (!) And this comes from an employer who claims to offer fair opportunities, team working and respect diversity!

I am just writing all this, so that younger people don't have illusions as to what is going on at least nowadays in the job seeking sector, and how ruthless, "robotic" and bigoted organisations are.