When the Department of Anthropology at Arizona State University was planning its transition into the School of Human Evolution and Social Change in 2005, a member of the Executive Board of the American Anthropological Association said in an interview, "This kind of program isn't going to strengthen anthropology, its going to destroy it." A bunch of non-anthropologist faculty positions were added to the program, mostly new hires, and bunch of new anthropologists were hired (including yours truly in 2005). Now that the new school is five years old, has anthropology been destroyed? 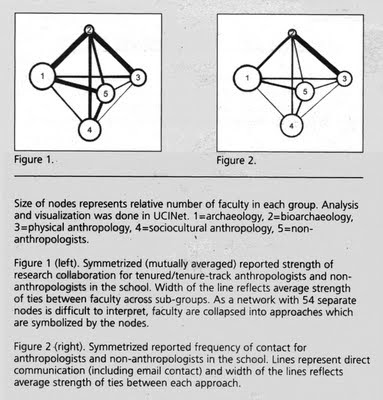 The results of the network study confirm my own subjective impression of the School of Human Evolution and Social Change. Anthropology is alive and well here, but many or most of us anthropologists are also engaged in transdisciplinary work and collaboration that both extends and strengthens anthropology. The fact that all of our faculty are empirical scholars with a scientific epistemology certainly helps processes of interaction and collaboration.

I can't link to the Anthropology News article because its not posted online yet. I find it very frustrating that they don't get around to posting their issues until after the paper copy has been distributed (I got my copy today). I'll try to add a link after the AAA gets around to posting the issue. On the other hand, since AN is not open access, many readers will not be able to access it. So maybe I'll download the article and post it on my website. The things one has to do to get around AAA publication policies!
Posted by Michael E. Smith at 3:51 PM