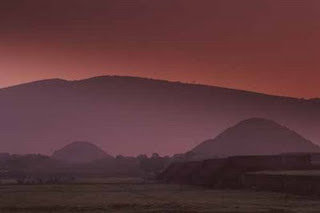 This morning I received an email with the news that William T. Sanders had died. Thirty-four years ago, I was an undergraduate doing archaeological survey under Bill Sanders in the Basin of Mexico. This was my first archaeological fieldwork experience, and it set the scene for my entire career. I would like to think that what I learned from Bill has been responsible for some part of whatever success I have had as an archaeologist. The fact that I am writing this from Toluca, Mexico, is due in part to my love of central Mexican archaeology, something I picked up from Bill 34 years ago this summer.

Sanders was a tireless fieldworker. He excavated and surveyed in many parts of Mesoamerica. His dedication in the field and his insights into the archaeological record made a lasting impression on me. When doing fieldwork, I still sometimes wonder what would Bill Sanders think about a particular context or situation or find.

I don't need to mention the accomplishments of William Sanders. He received most of the honors and awards that an archaeologist can get, he achieved the respect of the entire profession, and he was a larger than life figure in Mesoamerican archaeology. I'm sure that some very good obituaries will be published before long. I could not find a complete bibliography of his works on line, and I hope that such a list will be forthcoming.

Of greatest relevance to this blog, William Sanders published prolifically. Most or all of his many fieldwork projects have been published in the form of detailed data reports as well as interpretive studies. Few archaeologists can claim to have published as many data reports (WorldCat has 40 books listed). Many were published through the series, “Occasional Papers in Anthropology” at . Although the production standards of this series often left something to be desired, the intellectual and scientific standards have always been high. Given the astonishingly high incidence of unpublished archaeological fieldwork, Sanders has been a guiding light in archaeological publishing. It is much better for the profession to get the data published, in whatever format, than to sit on data waiting for it to achieve some kind of perfection before publishing. I will refrain from naming names here, to protect the guilty.

Sanders also published some of the most influential syntheses of Mesoamerican archaeology. : The Evolution of a Civilization (Sanders, and Price 1968) was a landmark study that established a scientific comparative framework for the Mesoamerican past. People have been attacking this book for 40 years now, a sure signal of its importance and influence. There were aspects of Sanders’s theoretical approach that one could criticize, but he was consistent and thorough and very clear about his views, which were always based strongly on the data. The Basin of Mexico: Ecological Processes in the Evolution of a Civilization (Sanders, et al. 1979) was another enormously influential book.

Sanders always liked a good argument (as anyone who ever hung around Mesoamericanists at a meeting of the Society for American Archaeology can attest), and many of his debates were carried out in journal articles, book chapters, and book reviews. Published critiques and debates are essential for the health of archaeology, and Bill’s contributions were models of scientific argument. He always focused on the data and the issues, without the ad hominen attacks that are unfortunately all too frequent in archaeology today. I considered it a badge of honor that my very first professional conference paper (at the 1976 SAA meetings) was attacked by Bill Sanders. I wish there was time at such conferences now for discussion and questions after papers (although such time constraints did not always seem to bother Bill.....)

I’ll stop here; I could easily go on and on about William Sanders. I always had great respect and admiration for him as a scholar and as a person, and I was proud to count him as a mentor, a colleague, and a friend. His contributions to publishing in archaeology are matched by few. He also has the distinction of publishing a paper with one of my favorite titles: “The Jolly Green Giant in Tenth Century Yucatan” (Sanders 1979).

A VERY SHORT LIST OF A FEW OF HIS IMPORTANT PUBLICATIONS:


I've posted a List of books by William T. Sanders on WORLDCAT.
.
Posted by Michael E. Smith at 6:03 PM

Email ThisBlogThis!Share to TwitterShare to FacebookShare to Pinterest
Labels: biographies

Thank you Michael for a moving tribute to my uncle. His memorial service with colleagues as well as the many emails and calls from around the world reminded us that beyond his loyalty and love for our Sanders family, there existed love and devotion for his colleagues, his discipline and for humanity. As my father, biologist Gerald Sanders, said during the family service, "Bill, you are a unique individual, greatly loved and admired by all of us--you will be deeply missed. And although irreplaceable, your legacy will live on in some very fine DNA and some very fine work."

I think your comments meant much more than the NY Times could have. Thank you for sharing your experience and thoughts about our Uncle Bill. I was a great niece and knew him better through stories my Grandpa (his brother) shared. I had the pleasure of sharing some time with him his visits to the West Coast. It is always facinating to hear what others have to say about a loved one. I hope you carry on in as fine a tradition. These are big shoes that need filling. Please don't let his love and legacy die off. Keep challenge and discovery alive!